Congratulations on your latest novel! Can you tell us a little about A Family Affair?

A Family Affair peers behind the facade of what appears to be a picture-perfect middle class family. The Mafu family is headed by the patriarch, Abraham, who is the pastor at a church and his long-standing wife, Phumla. It is a family saga set in Bulawayo against the backdrop of patriarchy, religion and traditional family values. It incorporates romance and sex, sometimes illicit and not always consensual. There's humour, drama and intrigue!

You grew up in Zimbabwe, leaving Bulawayo in 2008 for Johannesburg. How did the different perspective impact on the kinds of things you were interested in writing about?

I think leaving Zimbabwe changed my perspective. You grow up with a reality which is influenced by your family, community and country, which then becomes your truth. So leaving a country will have you re-evaluating those realities. Being a migrant certainly influenced my decision to write The Golddiggers because, as a migrant, you are always trying to negotiate your path in what often can be a hostile present while trying to not lose ties to your past. You live with a constant tension of what you left behind and what you are trying to create. I doubt that, if I had remained in Zimbabwe, I would have considered a novel about migration.

In preparation for The Golddiggers, you spent a month walking around Hillbrow to understand the space you set the work in. Why is it so important to you that readers fully recognise spaces and settings close to their own hearts?

I believe books should transport you to places, whether real or imagined. As a child growing up in Bulawayo I was able to travel to New York, London and Brazil while stretched out on a couch in the living room. Then some books took me to prehistoric times like Jean M Auel in the Earth's Children series, which I loved. I hate reading a book and not being able to locate myself. We don't live in a vacuum. 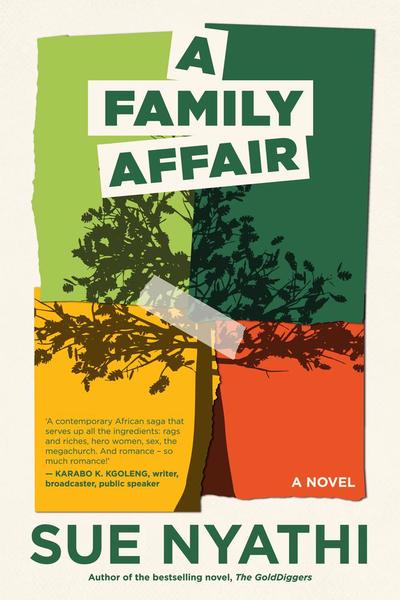 A Family Affair is set in Bulawayo. Was it hard or nostalgic writing about a place you once called home?
It was nostalgic! What was hard was reconciling the fact that it is no longer home. The book is set in the late 90s, so I was also writing about a specific time and place: a Bulawayo of a bygone era. That Bulawayo no longer exists and so, through my writing, I wanted to recapture it and make readers reminisce about the good old days ... because they were good. I think the hard part is going to Bulawayo now and remembering what was and what probably will never be.

You haven't been shy of addressing some heavy political topics, like xenophobic violence (in The Golddiggers) or, in A Family Affair, religion. Do you feel that fiction can help people understand issues and empathise in a different way?

I'm intentional about provoking empathy and creating a conversation around those kind of topics. For me, writing is a space where I can be bold and brazen, uncensored even. I believe fiction is a great way of tackling somewhat heavy subjects. People react differently to stories, which is why television and movies work well. With fiction you can disarm a reader, reel them in and then, once they are in, there's no turning back!

Between juggling a career as an investment analyst and being a mum, it's amazing you're also such a prolific author. What things are necessary to make sure you have the time and space to write?

Thank you for the compliment about being a prolific writer! Apart from doing English literature at school I didn't study creative writing, so I always feel like I am winging it. So I really do take such descriptions to heart. I've always had to fit writing in around my busy schedule, even if it meant writing from 3am to 6am every day before getting ready for work. When I write, I prefer silence and that is probably the quietest time of day, especially when you have a child. Thankfully I am no longer juggling the investment career with writing and motherhood. Frankly, juggling is so exhausting. Just shy of my 40th birthday I was retrenched from my job in a stockbroking firm. I started writing A Family Affair then and I have never looked back. It was a blessing in disguise. I now write for a living. I believe I am living in my purpose. I was always a writer by passion and an investment analyst by profession.

It's hard to take a chance working on a big project like a novel when you don't know if it will be published. How did you find your first publisher?

Life is about taking chances and believing in yourself. My debut novel, The Polygamist was self published because I could not get a traditional publisher who was interested in it. That book was published in 2012 and is now eight years old and is still selling. Very few books have a shelf life that long. I was fortunate in that, at the time, I had access to cash to fund it. Yes, writing fiction is risky but then, as they say in finance, the higher the risk, the higher the return. So The Polygamist helped in putting my name out there. By the time I was looking for a publisher for the The Golddiggers I wasn't an unknown in the literary circles and that made finding a publisher easier.

How can we encourage more African authors, particularly women, to write stories that are meaningful to them?

I don't think you can actually. People write stories that resonate with them. People read for many reasons, some want meaning and others just want to laugh. Diversity is truly the spice of life so I think we should just encourage African women to tell authentic African stories.

2 escaped Zimbabwean prisoners re-arrested, 3 on the run in South Africa

Over 90 000 arrested in cross border crimes

Bosso under fire over CEO qualifications

'Difficult decisions have to be made' Kasukuwere says